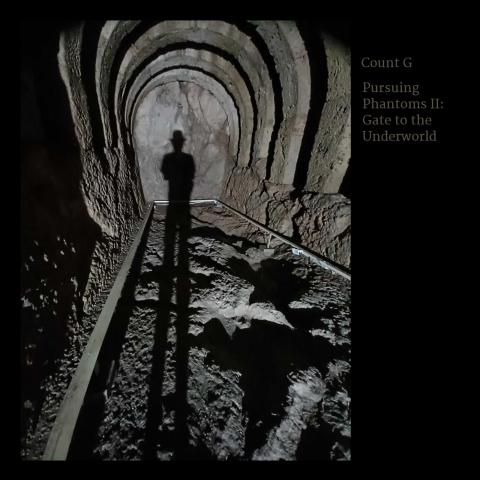 This music is like ethnographic work. It chronicles almost three years of living in a pandemic. Some of it is dark and brooding, some of it loose and open-hearted. Pursuing phantoms happens in both ways

With its companion, Pursuing Phantoms III, the two records are like twins that deserve their independence. They were conceived in the same situation and subsequently coalesced into different assemblies according to mood. They exist separately as works but belong in conversation with each other and gain from their juxtaposition. They belong to the same adventure..

Each piece charts its own waters. Although conceived and created from the experience of isolation, what was learned in the process is that isolation in a pandemic produces uncanny commonality. From this standpoint, each piece is also a mapping of the commons. Isolation breeds plurality. In solitude we imagine interrelation. A wonderful group of musician friends in different parts of the globe generously contributed to the realization of this music. The Sublamental family is growing.

1 – Dark trio for the wounded

Trio for piano, viola, and synthesizer, composed in May 2020 in response to anti-black violence in America.

2 – Calling on demons who listen

A clarinet improvisation, recorded through corrugated tubing around midnight out in Riverside Park and brutally processed. Overdubbed bassoon and cello are improvised with sole instruction to think from the standpoint of breath. A NY Covid piece.

3 – Sleeping with the stones

The musicality of dreaming out loud with windows open to the morning breeze. Recorded in Galaxidi, September 2021.

Based on the improvised self-undoing assertion: Δεν υπάρχει. Δεν το έχεις. Αποκλείεται. Μη νομίζεις. (“It doesn’t exist. You don’t have it. It’s impossible. Don’t believe it”)

Based on a recorded dinner conversation in New York before the pandemic, which was sampled, digitized, and subsequently scored for several instruments. First composition under lockdown during the heavy days of the NYC massacre in April 2020. A symphonic feedback piece that gives voice to the nightmare.

Ballet written for piano, flute, and synthesizer. Written in New York in 2018, while Count G was working on Music for Street Rumor. It reflects the frantic conditions of those incessant traveling days. It’s likely undanceable.

Giving a jazz quartet the opportunity to play atonal music. Based on a simple two-note call on the piano, with fretless bass and flute as lead instruments. Surrounding noise and home percussion sounds added in the studio.

8 – Falling off the steel towers

A circuitous composition that entertains the idea of falling to no end as the experience of modern life. Initially, two synthesizer improvisations, recorded in the underground caverns of Leros island, were brought head-to-head. From the collision, several pieces were excised. Tapes were then sent out for guitar and rusty horn interventions and returned to the caverns for the clarinet parts.

9 – A drain pipe for a flute (I. Listen Mayakovsky II. Vladimir takes his horn III. Nothing is certain IV. What about you? V. Nocturne for disgrace)

An expansive electroacoustic suite of musique concrète, industrial punk, turntablism, free horn improvisation, and tape loop manipulation in 5 episodes. Based on twisting voice samples from a trio of famous Vladimirs: Lenin’s “Address to the Third Communist International”; Mayakovsky’s poems “Listen” and “What About You?”; and Beckett’s Vladimir desperately waiting for Godot. Except for Episode I, which was recorded live at MT’s home, Count G sent tapes to friends with instructions for structured improvisation. A musical call to arms against the confusion of ideas. Dedicated to the failure of the 20th century.

A reiteration of the opening trio in light of greater darkness. Recorded with mind to how the violence continues. Originally dedicated to the dead. But today we choose to look outside.

Count G: piano, clarinet, keyboards, voices, tapes, and all other sounds not noted above

Compositions and production by Count G