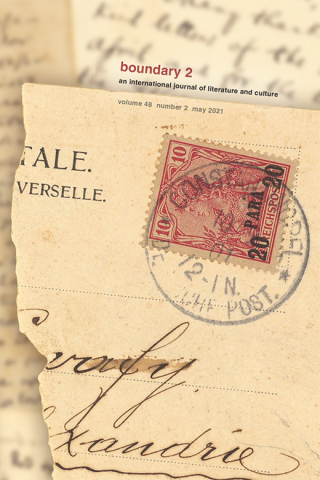 "The Cavafy Dossier" is a special issue of the journal boundary 2, with essays based on presentations discussed in workshop mode during the 3rd International Cavafy Summer School in Athens in 2019.

Stathis Gourgouris, "Preface to a Pedagogical Document"
Peter Jeffreys, "Cavafy's Lament: Commerce, Culture, and Mimicry in the Early Life of the Poet"
Takis Kayalis, "At a Slight Angle to the Empire: Cavafy among the British"
Vassiliki Kolokotroni, "Cavafy among the Modernists"
Alexander Kazamias, "Another Colonial History: How Cosmopolitan Was Cavafy's Alexandria?"
Hala Halim, "C.P. Cavafy as an Egyptiote"
Yiannis Papatheodorou, "The Return of the Barbarians and the Colonial Order of the Archive"
Aamir R. Mufti, "Constantine Cavafy in the Colony: Hellenism at the Margins of Empire"