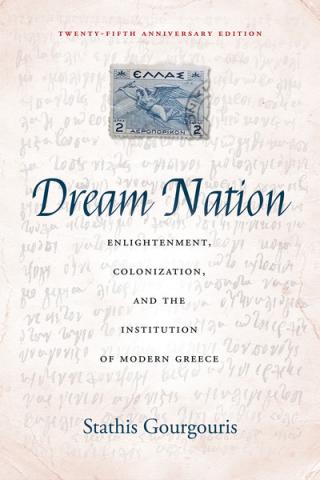 Against the backdrop of ever-increasing nationalist violence during the last decade of the twentieth century, this book challenges standard analyses of nation formation by elaborating on the nation's dream-like hold over the modern social imagination. Stathis Gourgouris argues that the national fantasy lies at the core of the Enlightenment imaginary, embodying its central paradox: the intertwining of anthropological universality with the primacy of a cultural ideal.

Crucial to the operation of this paradox and fundamental in its ambiguity is the figure of Greece, the universal alibi and cultural predicate behind national-cultural consolidation throughout colonialist Europe. The largely unpredictable institution of a modern Greek nation in 1830 undoes the interweaving of Enlightenment and Philhellenism, whose centrifugal strands continue to unravel the certainty of European history, down to the internal predicaments of the European Union or the tragedy of the Balkan conflicts.

This 25th Anniversary edition of the book includes a new preface by the author in which he situates the book's original insights in retrospect against the newer developments in the social and political conditions of a now globalized world: the neocolonial resurgence of nationalism and racism, the failure of social democratic institutions, the crisis of sovereignty and citizenship, and the brutal conditions of stateless peoples.

"Stathis Gourgouris's Dream Nation establishes a new kind of cultural criticism. It weaves together the methods of history, literary and psychoanalytic theory, comparative literature and political science. This is a bracing, touching, exciting work, catapulting its author to eminence."

"Following the dream-state of the emergence and persistence of the nation as a cultural and political form, Dream Nation makes a crucial contribution to our sense of the quotidian history of modernity. Gourgouris's deft retrieval of the problematic history of the Greek Enlightenment and its rich, resonant cultural discourses gives a new turn to our understanding of the pedagogies of state formation. In this splendid book, the archive of 'Neohellenic' writers converse animatedly with postcolonial and poststructuralist thinkers, while we, its readers, participate in an enlightened argument that deals with the ethics of 'othering' by suggesting that in order to be Greeks we must also entertain the possibility of being Turks."

_ Homi Bhabha, author of The Location of Culture

"A quarter century ago, Dream Nation revealed the genetic link between Orientalism and Philhellenism in the modern West: whereas the former helped to define Europe against its Asiatic others, the latter did so by placing its origins in Greek antiquity. Both processes were colonial in nature. This new edition returns this pioneering book to ongoing discussions of culture, power, and conflict in these perilous times."

_ Aamir Mufti, author of Enlightenment in the Colony

"[A] general audience, too, can benefit from Gourgouris's revisions of accepted theory, especially his questioning of the way in which the Greek Enlightenment created the first phase of a new national identity. Despite Gourgouris's claim that he merely raises questions instead of forging conclusions, readers will find that many conclusions are indeed offered, and furthermore that the Enlightenment is employed to reach both backwards and forwards in Greece's imaginative history in a way that might even suggest a postmodern sort of linearity."

"Crafting a story of nationalism that moves further than the linear logic of capital, Gourgouris studies the dream of Greece as part of the productive forces that operated in its making. Dream Nation makes a powerful contribution to the theory of nationalism: it guides us down a fresh avenue of thinking, beyond the sociology of imagined communities.'"

"We dream ourselves a nation. It is a conspiracy that perdures, and which hardens and constricts our global imagination. This halluci-nation is what Stathis Gourgouris dismantles with poetic precision and unabated urgency, over a prodigious range of fantastic elaborations and retroactive projections, urging us, finally, to develop an ear better attuned to the sounds of history."

"This is an original and important study of nation formation as social imaginary signification, raising theoretical and political questions of collective identity, ethnicity, autonomy, culture, and tradition in the modern world. Adopting insights from a variety of disciplines (literary criticism, cultural studies, psychoanalysis, philosophy, economics) and drawing on material from different genres, the author approaches his topic in a synthetic way that allows for a multiplicity of perspectives and a wealth of data. A wonderful sense of adventure permeates this book, which offers a model for the study of national identities."

–Vassilis Lambropoulos, author of The Rise of Eurocentrism: Anatomy of Interpretation

"By meticulously working through the Neohellenic nationalist fantasy as an interminable process of becoming universal in a particular way, bound up with European Philhellenism's 'colonization of the ideal,' Dream Nation brilliantly performs the necessary paradox of theorizing in the crucible of history. A quarter of a century after its initial publication, the demands that Gourgouris's critical mythography makes on the reader at the entangled site of 'Greece,' 'modernity,' and 'nation' are newly urgent."

–Brooke Holmes, author of The Symptom and the Subject: The Emergence of the Physical Body in Ancient Greece