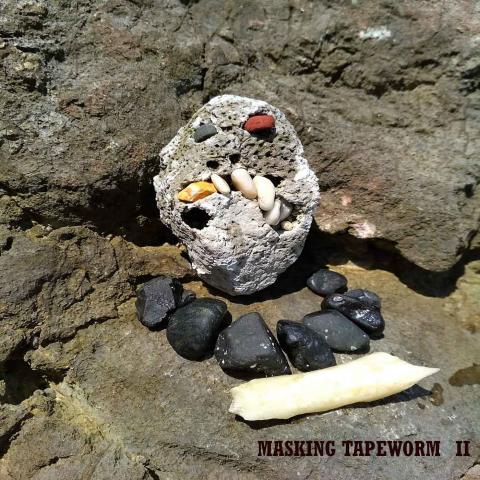 Following their inaugural untitled EP in 2019, this is the first Masking Tapeworm album, but sadly it is also their last. The group abruptly disbanded in the midst of the first pandemic surge. The reasons behind this decision remain as mysterious as is everything about this band, which refuses to be photographed. Nonetheless, sources inside Sublamental assure us that the break-up was amicable and that, although the band no longer exists, the musicians will continue to collaborate in other ways.

Count G confirmed the rumor that upon arrival at the Southeastern Aegean island the band calls home for his usual summer splash, MT made a visit to announce the end of the band. He left behind a bunch of tapes recorded in his home studio – a rather peculiar gesture if one recalls that MT is notorious for his massive collection of tapes of field recordings and weird sound experiments conducted still in old-fashioned analog manner. More peculiar still was his command that Count G do whatever he wants with the lot.

Indeed, the command was perplexing, especially as the state of the recordings was rather poor even if the material was intriguing. There were different versions of unmixed tracks and jams that didn’t even pretend to constitute proper songs, including instrument parts meant to be overdubbed but often improperly timed or in the wrong key. Ever curious and intrepid as an archeologist, G brought the lot with him upon his return to New York and applied himself to the process of sculpting and restoring over several months.

With free license over the production, G called upon the services of his dear friend Hive Silk and her magic mallets, which give the saturated sound a more ethereal touch. Plus, he decided to add some synth glue of his own, especially in the long jazz improv of “The Silk Hypothesis” and the dense funk-noise labyrinth of “Venus Why You”. In order to sustain some center of gravity, G decided to leave out several tracks which were deemed to be either beyond repair or were of a different spirit.

The result is a brisk 37 minutes of blistering electro-funk fusion in which one can trace the sun-drenched party atmosphere of the island before the pandemic.

As strange as this music is, it is meant to provoke gyrations, which are especially coveted in the sedentary isolation we all find ourselves in. So, accept the invitation and seize the hand that will get you up on your feet. And play it LOUD.