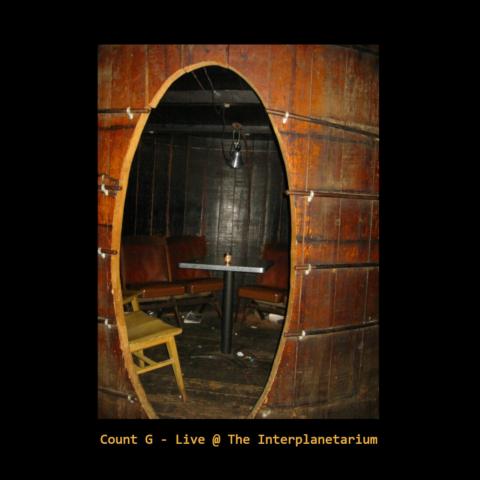 In these troubled times, when retreat and enclosure behind barriers and borders has made necessity seem natural, the precious openness of the planet is in danger of being forgotten. All the more reason to open the doors of The Interplanetarium.

Responding to the isolation of the pandemic, Count G abandoned plans to mix the second Masking Tapeworm album and his own experiments with orchestral arrangements and decided to go live.

Courtesy of the Sublamental Artists Collective, he has released the following statement:

“This music reflects two separate dates at The Interplanetarium, on July 29th and September 20th, 2020, in the midst of the pandemic. My decision to go live came from a desire to meet the moment far from the endless reflexive spaces of isolation and to risk making music on split second decisions.

It also gave me a chance to pay tribute to the experimental music scenes in Cairo and Beirut, which have been awesome sources of inspiration in recent years. Sampling these innovative encounters nourished my decision to go live with this material.

While mixing and restoring audio quality in the studio, I also realized how much this music owes to some groundbreaking recordings of my youth. I felt surrounded by echoes of The Faust Tapes and Can’s E.F.S series, as well as Sun Ra’s space explorations – but such is always the case.

In many ways, the music here is very personal to me; it reflects the full range of my thoughts and feelings in these troubled times. It is also the most overtly political record I have made.”

Digital and analog recording was done simultaneously, as samples were created and mixed on the spot to provide an instant mirror surface for synth improvisations. Occasionally, old tapes of field recordings and noises made by G himself were allowed to float in the background as auditory enhancements. No overdubs were made, except on “Portamento demento” which is essentially a duet between Count G and Masking Tapeworm on guitar, and “Worms eating @ 80rpm” which features the splendid bass instincts of King Kong of Korinth. Some transitions were added during the mastering process of the 2-track original live recordings at The Boys Room, upon Count G’s return to New York in November 2020.

This double album is meant to be heard without silence between tracks, with possibly a break between sets, but one does as one pleases. Happy journeys in the dark!