The Realm of Things 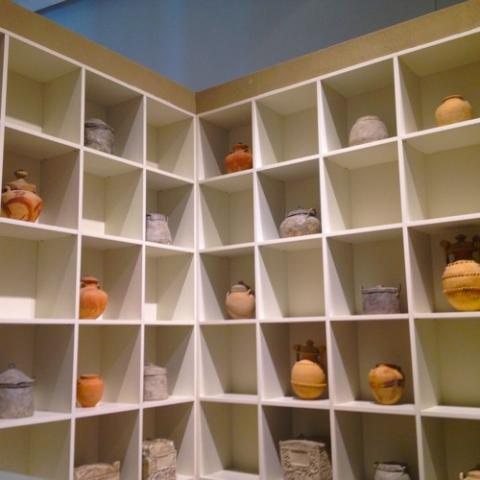 SynTalk thinks about the (sometimes?) subterranean world of things, and wonders how the world might look from the standpoint of the Thing. We also tentatively wonder if things indeed have a social life, and if the composite affair of thingness is highly linked to the notion of permanence. The concepts are derived off / from Akka Mahadevi, Rumi, Marx, Coomaraswamy, Heidegger, Adorno, Thomsen, Derrida, Jane Bennett, Maturana, Varela, Bruno Latour, & Bill Brown, among others. What (if any) is the difference between an object and a thing, and can one think of it using the framework of phase transition (& change of property)? Is materiality the primary level of reality? What is it like to be a thing from the past (when one looks at an archaeological artifact)? How a thing cannot avoid being involved in history, & there being a ‘historical ontology’ of things. Can we even posit ‘thinghood’ to something that existed before we existed? Does a water bottle have a meaning in itself? What does it mean to be a solid? Is the pyramid (today) an object or a thing? Is the distinction between a thing and ‘the elemental’ more interesting? Does the object always need a subject (with language & semantics)? Is the integrity or singularity of a thing always porous? Is it highly likely that the self organizing tendency of matter serves a social function? Does this provide a clue that things may in fact have a social life? How (& why) did inanimate (inorganic) matter create human beings, and whether we are likely to be recreated (sooner) by things left behind were we to go extinct? Does every thing get to be objectified? The links between rubber, ~23% beta bronze, atoms, CD ROMs, stainless steel, crystals, Challenger disaster, birds, robots, lotus leaves, & nano materials. ‘Why we should weld but the welding should not be seen’? In what sense is a poem a thing? ‘I died as a mineral and became a plant…’. The SynTalkrs are: Prof. Pushan Ayyub (material sciences, TIFR, Mumbai), Prof. Stathis Gourgouris (philosophy, literature, Columbia University, New York), & Prof. Sharada Srinivasan (archaeology, dance, NIAS, IISc, Bangalore).

SynTalk is pleased and privileged to have hosted the following SynTalkrs (in alphabetical order) on its #TROT show.

Prof. Pushan Ayyub (material sciences, nano science) is a Senior Professor and Chairperson of the Department of Condensed Matter Physics at the Tata Institute of Fundamental Research (TIFR), Mumbai. His research interests concern studies of the size dependence of physical properties in the nanometer regime, where the basic question is: how does a particular property (say, colour, resistance, or magnetism) evolve from atoms to clusters to bulk solids? His recent research on one-dimensional nanomaterials has uncovered several novel nanotechnology applications. In the general area of nanoscience, he has about 140 publications in international journals and has given invited talks at over 55 international conferences and many national meetings. Educated at Jadavpur University (M.Sc., Physics), TIFR Mumbai (Ph.D.) and the University of Florida (post-doc), Ayyub re-joined TIFR in 1990. He is currently a member of the Nano Mission Council of the Govt. of India (DST). He won the National Research Award in Nanoscience and Technology (2010) and is a Fellow of the Indian National Science Academy (INSA).

Prof. Stathis Gourgouris (philosophy, literature) is a Professor and Director of the Institute for Comparative Literature & Society, Columbia University, US. He writes and teaches on a variety of subjects, ultimately entwined around questions of the poetics and politics of modernity and democracy. His interests include Literary Theory, modernist poetics, Enlightenment thought, pre-Socratic philosophy, experimental music, & contemporary Greek poetry. He is the author of Dream Nation: Enlightenment, Colonization, and the Institution of Modern Greece (1996), Does Literature Think? Literature as Theory for an Antimythical Era (2003), Lessons in Secular Criticism (2013) and editor of Freud and Fundamentalism (2010). He is currently completing work on two other projects of secular criticism: The Perils of the One and Nothing Sacred. He is also an internationally awarded poet and writes regularly in internet media (such as Al Jazeera, The Immanent Frame, Re-Public), as well as major Greek newspapers and journals on political and literary matters. He completed his Ph.D. (1990) and MA (1984) in Comparative Literature from University of California, Los Angeles.

Prof. Sharada Srinivasan (archaeology, dance) is Professor at National Institute of Advanced Studies (NIAS), Bangalore, and has made pioneering contributions to the study of archaeology and history of art from the perspective of exploring engineering applications in these disciplines, i.e. archaeometry, archaeometallurgy and archaeological sciences. She is a Fellow of the Royal Asiatic Society of Great Britain and World Academy of Art and Science. She is a recipient of several awards & recognitions including the Dr. Kalpana Chawla Young Women Scientist Award for 2011, the Indian Institute of Metals, Certificate of Excellence 2007 and Materials Research Society of India Medal 2006, & the Flinders Petrie Medal 1989 from University of London. Her landmark contributions have included archaeometric characterisation of bronzes of south India. She is the first author of the book ‘India’s Legendary Wootz Steel: An advanced material of the ancient world’, and author of more than 60 research papers.  She is also an acclaimed performer of Bharata Natyam and has given numerous lecture-demonstrations at venues such as the Royal Academy of Arts, London. She has also performed in ‘Danse e-toile’, a unique cross-continental internet streamed contemporary classical duet performance for the Festival ‘La Nouvella’ (2009) of Cite de L’Espace, Toulouse, France and for TEDX-GCT. She has a Ph.D. from Institute of Archaeology, University College London (1996) on Archaeometallurgy of South Indian bronzes, M.A. from School of Oriental & African Studies, London (1989), and B.Tech. in Engineering Physics from IITB, Mumbai (1987).

Note: Any & all errors in the brief profiles above are SynTalk’s own.